German stroller brand Cybex is best known for their Aton infant car seat, a pricey but well designed entry in that category. Less well known are Cybex’s strollers, which have seen much less success. Here’s an overview:

The models. Cybex is the Germany-based stroller maker that has tried and failed to crack the US market in recent years. Upon its first debut, Cybex tried to sell brightly colored umbrella strollers, only to see those models languish thanks to high prices and some dubious design choices (white frames and wheels don’t sell well here).

The Priam (pictured above) is a a multi-function stroller with a one hand fold (with the seat on the frame), one hand recline, reversible seat, all-wheel suspension and extendible canopy. To customize it, first pick a frame (four colors) then choose a seat pack (12 seat packs including designer Karolina Kurkova’s exclusive fabric and a couple Ferrari licensed colors). The base price is $1000 with the rose gold tone frame and some of the seat packs costing more.

New this year is the E-Priam with Smart Assist, a battery powered version of the Priam stroller frame that offers an extra push uphill or over uneven terrain as well as assistance slowing the stroller going downhill. The rest of the features are similar. Pricing starts at $1400.

The Priam works with the Cybex Aton Q and Cloud Q infant seats. And yes, for our readers in Minnesota, the Priam does have a ski accessory, where the front wheels are swapped out for a snowmobile like effect. 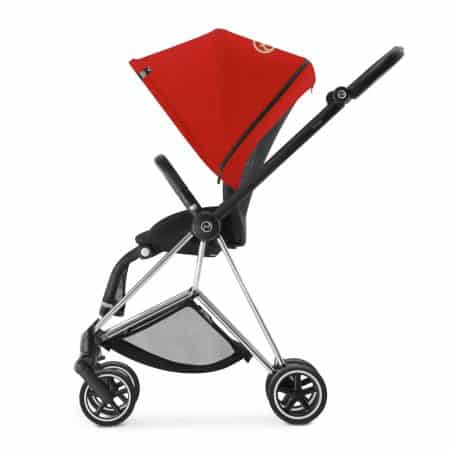 The Mios is a lightweight version of the Priam.

Cybex also sells what they call the “little brother” of the Priam, the Mios. Priced at $650, the Mios showcases Cybex’s mesh fabric on the backrest and footrest to combat overheating. A padded cushion can be added over the mesh on cooler days. The 21.4 lb. stroller comes with a one-hand fold to a stand alone position, extendable canopy, reversible seat, one hand recline and all wheel suspension. While the cup holder is extra, a rain cover, bumper bar and car seat adapters for Cybex and GB infant seats are included.

If these strollers are too pricey, Cybex offers several other strollers in the $260 to $470 range. 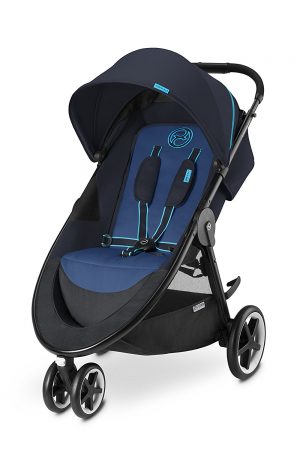 The Agis M-Air3 stroller offers a three in one system so you can use a carry cot, infant car seat and toddler seat.

The Agis M-Air 3 ($150) is a souped up Baby Jogger City Mini—that is, a tri-wheel stroller with height adjustable handle, two step fold and a no rethread harness, which is common car seats but unusual for strollers. A four wheel version of this stroller is called the Agis M-Air4 ($230 to $280).

The Eternis ($360)  is similar to the Agis, but features larger wheels. Again, there are both three wheel (Eternis M3) and four-wheel (Eternis M4)versions of this model. While the Eternis is no longer featured on Cybex’s web site, it is still for sale at Buy Buy Baby.

The Balios M ($400) stroller is similar to the Eternis but adds a reversible, removable seat. With the seat removed, you can pop in a Cybex Aton infant car seat.

Cybex is releasing the Eezy S Twist stroller, with a unique way of turning the seat to face front or back by twisting it. The padded seat has a full recline, two stage fold (to flat) and car seat adapter. The seat is airline compliant and has a weight limit of 55 lbs. We saw a prototype at a recent baby manufacturers show where it weighed 19.3 lbs. Cybex expects it to come in under 17 lbs. when it’s released in April, 2018. Here’s a video demo we shot of the Eezy S Twist:

None of these last four strollers (Agis, Eternis, Balios and Eezy S Twist appear on Cybex’s web site. They are also rather difficult to find online. It looks like Cybex might be phasing them out.

Our view. Cybex is one of those brands that is difficult to pin down. After being acquired by Chinese baby good behemoth GoodBaby in 2014, the company’s stroller relaunch in 2015 was unfocused. Is the company trying to be Bugaboo with modular $1000 strollers? Or is it more of a Baby Jogger clone with strollers under $500?

Strollers often feel like a sideline for Cybex, 90% of whose sales come from car seats (reportedly).

Clouding the picture for Cybex is the lack of reader/parent feedback. These strollers sell in such small numbers that it’s hard to get a fix on Cybex. In our own hands-on inspections, we’d say that Cybex strollers are generally well designed and constructed. Previous Cybex models were liked (but not loved) by our readers. The fold on the Iris is a good example of this—you first have to fold the seat over on itself. Then the stroller folds in half. Nice, but not quite the one-hand quick fold of competitors.

The Cybex Priam clearly is aimed at the likes of UPPAbaby’s Vista and, on paper, the Priam is impressive—it has more mix-and-match options with the wheels and seats than the Vista. But note the bassinet for the Vista is rated for overnight sleep; and the Vista can expand to become a double. No such luck on the Priam. We’d also rate the Priam’s storage basket as inferior to the Vista . . . which also costs about 20% less than a Priam.

So that sums up Cybex—good, but not great enough to get a top rating at these price points. Baby Bargains Resale Rank: Excellent. Rating: B