Good news! If you own the ever popular Diaper Genie Diaper Pail, there are some money-saving options for refill bags. Do they keep out the stink? Are they easy to use? What are the trade-offs? To find out, we tested four popular options with 30 stinky diapers. (You're welcome!). Which came out on top? Here are the results.

FYI: We are Baby Bargains, the #1 online resource for honest and independent review of baby gear. And we don't take money from the brand we review! Baby Bargains is 100% reader-supported. 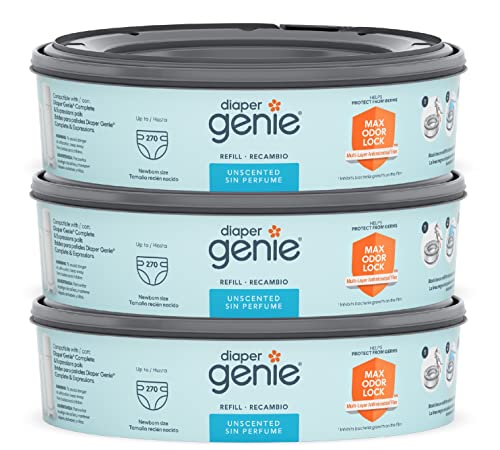 Pricey but effective
The O.G.—Diaper Genie's own refills came out tops in our stink test. They did the best in controlling odor . . . but that doesn't mean your nursery will be smell free when baby starts solid foods.
$18.49

And that’s helpful if you live in a condo or apartment and can’t always run dirty diapers out to a trash can.

But those refill cartridges can get expensive to buy. And today you have more choices than Playtex’s own company brand of refill bags. For this article, we wrapped 30 stinky diapers with different refill bags to see if less expensive bags did the job. Did they control odor? Were they as easy to use as the original? What were the trade-offs to save money?

Here’s what we found: for the best odor control, Playtex’s own Diaper Genie Refill Bags still come out on top. Here’s a quick overview of the testing results:

• The least stink. This was especially true when baby starts solid foods. Now this doesn’t mean the nursery we tested was completely stink-free—it was just less stinky than the less expensive refill alternatives by a rather large margin.

• Thick plastic that doesn’t tear. That’s one of the downsides to the cheaper bags—even though all claim they are made from seven-layers of plastic, our testing show some of the cheaper ones tear much easier than the Playtex bags. And if you’ve ever encountered a torn open bag of dirty diapers, you’ll understand why this feature is so important!

• Only fit current models. The Diaper Genie has been around since the 90’s, so there are many older pails floating around garage sales. Be aware that this cartridge only works with the most current Diaper Genie models and isn’t backwards compatible.

• Pricey. We know—these official Diaper Genie Refill Bags are expensive. Our recommendation: use less expensive bags when baby is nursing or on formula—those diapers are less stinky. Then when baby starts solid foods (usually around six months), switch to these bags to better contain the odor. 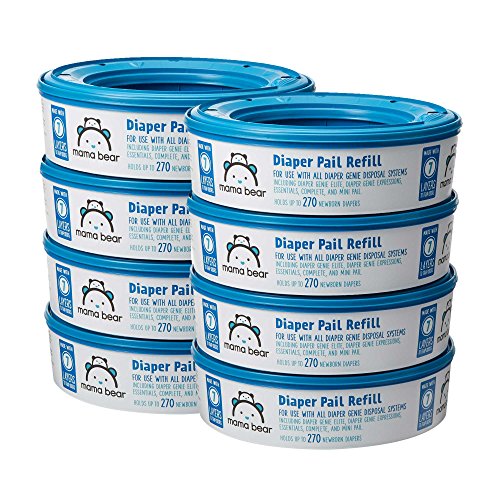 Affordable with caveat
These value-priced bags work well when baby is still nursing or on formula. But once you start solid foods, these can't control odor like our top pick.
$41.78

Mama Bear is Amazon’s own house brand of diapers and supplies. We tried out their diaper pail refills and were impressed overall—these are probably the best budget-friendly solution. Here’s what our testing showed:

• Affordable. The average baby goes through 2700 diapers in the first year alone. So every penny saved here adds up!

• Black line indicates the end of the cartridge.

• Odor control especially for babies that have started solid foods. There’s no good way to say it—these refills stunk more than Playtex’s Diaper Genie refills (see above). On the positive side, we’d suggest these refills would do fine for babies that are still nursing or using formula. That’s because those diapers are less stinky . . . and these refills contain that lower level of stink, based on our testing.

• Tearing. These bags tear easier than the Playtex bags—take care when pulling them out of the diaper pail. 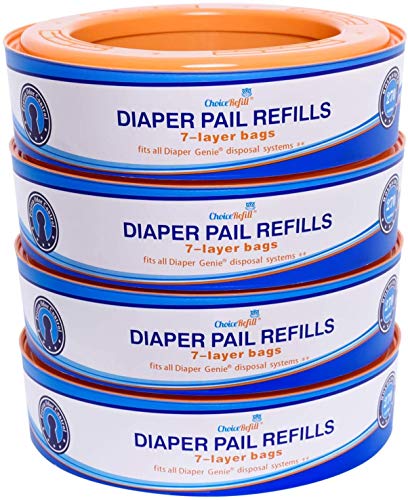 Strong plastic
Great price, but uses more plastic to wrap each diaper than the competition. That negates some of the savings. On the plus side, this one works with many different Genie models.
$11.99

ChoiceRefill’s Diaper Genie compatible refill bags are a strong contender in this category and have their own fan base. We tested a cartridge in our stinky diaper test. Here’s what we found:

• Great value. These refills are among the most affordable we tested, similar in price to BabyBreeze. That’s about a 60% savings over the brand name option.

• Strong plastic. In our testing, we thought the plastic used in the refills was comparable to the name brand—strong enough not to tear when removing it from the pail.

• Excess plastic. These refills had one very annoying feature: they use more plastic to wrap a diaper compared to others we tested. When we removed the diapers from the pail (the proverbial Diaper Sausage), we noticed about three-quarters of the chain was unused plastic. That negates the savings somewhat, in our opinion.

• Less than stellar odor control. The refill bags were tied for third place in our stink test. We’d recommend them only for babies who are still nursing—once you start solid foods, these bags won’t contain the stink as well as our top rated choice. 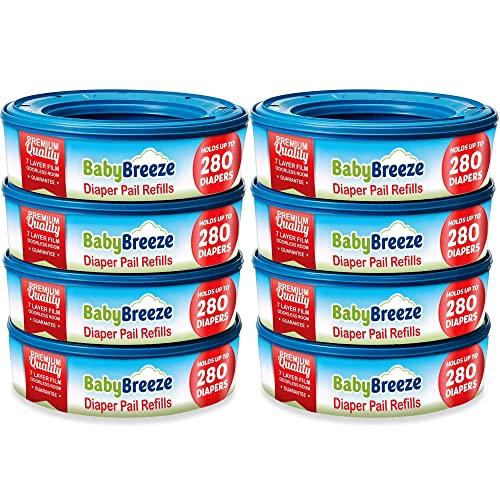 Good value
Affordable but doesn't work with all models (example: the Expressions is a no go). Came in third place in our stink testing—not bad, but not the best.
$27.99

BabyBreeze’s Diaper Refills for the Diaper Genie are an impressive bargain and garner kudos from parents we surveyed. So we tested them in person. How did they fair in our stinky diaper test? Here’s an overview.

• Affordable. Yes, these refills cost about 60% less than the brand name competition. And considering how many diapers you’ll change in one year (2700), that savings adds up big time.

• Stink control could use some work. We rated these refills bags third best in stink control—behind Playtex and Mama Bear. Again, these would work fine for newborns who are nursing or using formula. That’s because those diapers are less stinky to start with. But once you move to solid foods, Katy bar the door! These refill bags simply are no match for the stink.

• Not compatible with all Diaper Genie versions. Specifically, the Diaper Genie Expressions pails do NOT work with these refill bags.

• Didn’t fit some pails well. In our tests, these refill bags didn’t always fit the Diaper Genie tightly—that led to the lid sticking up a bit. And that’s not good, since it let’s the stink out.

We’ve been rating and reviewing baby gear, including diaper pails, since 1994. We do hands-on testing—we buy the products with our own money and evaluate with an eye toward safety, ease of use and affordability.

Here’s another key point: we don’t take money from the brands we review. No free samples, no sponsors, no “partnerships.” Baby Bargains is your independent and unbiased source for expert baby gear reviews. We are 100% reader-supported!