A collectible coin makes the perfect gift for a celebration—graduation, birth, grandchild and more! We interviewed three coin collectors and got their best recommendations. After looking at a dozen possible choices, we recommend these uncirculated coins are great gifts to commemorate the occasion. Here are the best bets!

FYI: We are Baby Bargains, the #1 online resource for honest and independent product reviews. We don't take money or freebies from brands we review. For this review, we purchased the snacks and tried them ourselves! Baby Bargains is 100% reader-supported. 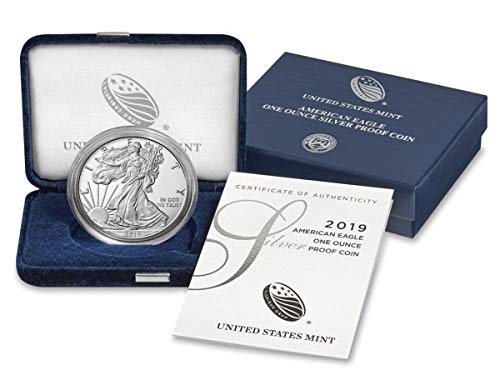 We loved the presentation of this coin, compete with a satin lined case and gift box from the US Mint.

Here is the official information about this coin from the US mint. There are only so many of these coins that are minted—once they sell out, they are gone until next year.

“American Eagle Silver Proof Coins are collector versions of the official United States bullion coins and are only available in the one ounce size.

American Eagle Silver Proof Coins are minted at the United States Mint at West Point and bear the “W” mint mark. The American Eagle Silver Coin’s obverse design is Adolph A. Weinman’s full-length figure of Liberty in full stride, enveloped in folds of the flag, with her right hand extended and branches of laurel and oak in her left.

The reverse design, by United States Mint Sculptor/Engraver John Mercanti, features the heraldic eagle with shield, an olive branch in the right talon and arrows in the left.

The American Eagle Silver Proof Coin contains 99.9 percent silver. The one ounce coin has a $1 face value and is 1.598 inches in diameter, contains 0.999 silver troy ounce and weighs 1.0000 troy ounce.

Each coin is packaged in a blue velvet, satin-lined presentation case.” 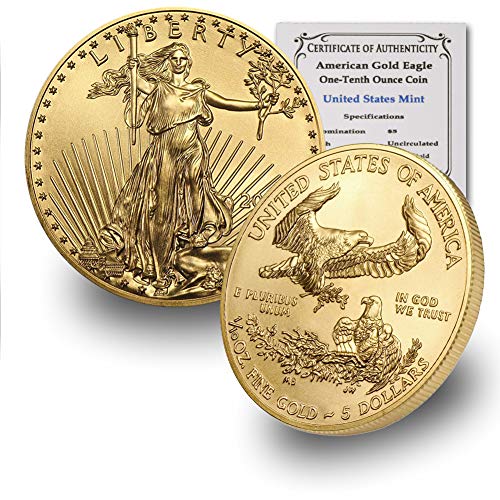 .10 troy ounce gold
Uncirculated Gold American Eagle coin is striking it in its gift box from the US Mint. Very impressive.

Yes, this is a gift your new grandchild won’t forget: an American Eagle Gold Coin.

Here is the official information on this coin from the US Mint. Only a limited number of these coins are minted each year—once they sell out, they are gone until next year’s version.

Struck in 22-karat gold and exquisitely crafted, it is cherished by collectors around the world.

Authorized by the Bullion Coin Act of 1985, American Eagle Gold Bullion Coins quickly became one of the world’s leading gold bullion investment coins. Produced from gold mined in the United States, American Eagles are imprinted with their gold content and legal tender “face” value. An American Eagle’s value is based on the market price of its metal content, plus a small premium to cover coinage and distribution.

American Eagles use the durable 22 karat standard established for gold circulating coinage over 350 years ago. They contain their stated amount of pure gold, plus small amounts of alloy. This creates harder coins that resist scratching and marring, which can diminish resale value.

What truly sets American Eagles apart is that they are the only bullion coins whose weight, content and purity are guaranteed by the United States Government.

The reverse design, by sculptor Miley Busiek, features a male eagle carrying an olive branch flying above a nest containing a female eagle and her hatchlings.” 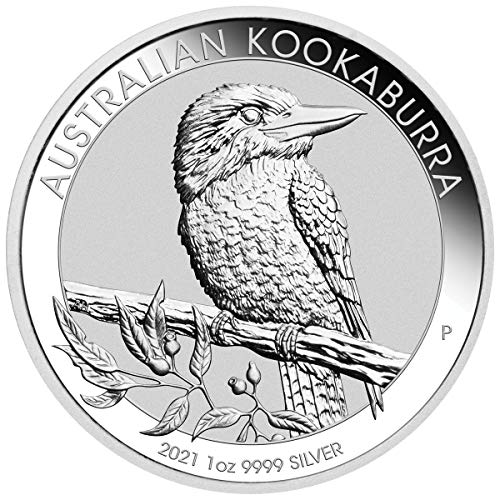 One troy ounce of silver
If you prefer to create your own gift box presentation, this coin is simply presented in a paper case.

And now for something different: a beautiful coin from Australia that celebrates the Kookaburra. This is an uncirculated coin—there are only 500,000 of these coins in circulation.

Here are the official details of this coin, which is minted by the Perth Mint in Australia.

“The 2020 One-Ounce Silver Kookaburra features a new one-year-only design of the friendly bird perched on a roof with the sun in the background. The coin’s year date, weight and silver purity is also engraved.

With its high silver content, razor-sharp strikes and delightful one-year-only designs, Australia’s Silver Kookaburra coin is an incredibly popular annual series. Little did the officials at the Peth Mint know that when they released their first coin in 1990 that the little bird from “Down Under” would become a global phenomenon. And now, in 2020, the Kookaburra returns with a special 30th Anniversary design.

Struck in a full ounce of highly pure 99.99% silver, this year’s new, one-year-only design depicts a laughing Kookaburra sitting atop a roof greeting the sun with its distinctive cackle—a sound that has the earned it the nickname “bushman’s clock” because of its early dawn and dusk cackling chorus. A ring around the design is engraved with the words AUSTRALIAN KOOKABURRA at the top and 30TH ANNIVERSARY at the bottom.

The coin’s obverse features artist Stuart Devlin’s design of a Kookaburra perched on a tree stump as it appeared on the first-ever 1990 Kookaburra release. Jody Clark’s effigy of Queen Elizabeth II has been reduced and appears at the top of the coin within its own ring, the 1990 and 2020 dates located on either side of the portrait. 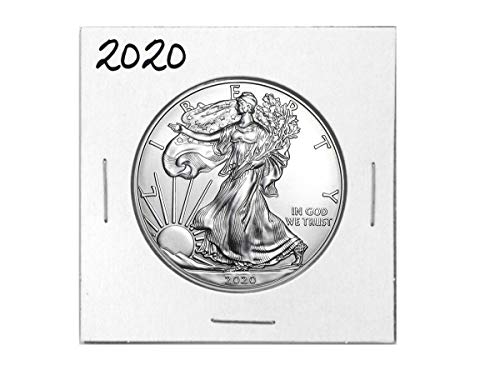 One troy ounce silver
If you prefer to create your own gift box presentation, this coin is simply presented in a paper case.

If you would like to do your own gift box presentation, you can save a good amount of money by buying the 2020 American Silver Dollar as a simple coin, stapled inside a cardboard case. Nothing fancy, but the coin is just the same as the one we describe earlier in this article.

We’ve been rating and reviewing gifts for new parents since 1994.

Here’s another key point: we don’t take money from the brands we review. No free samples, no sponsors, no “partnerships.” Baby Bargains is your independent and unbiased source for expert product reviews.